RMTC is lucky to have an awesome and passionate group of triathletes volunteer their time to run our organization. Each one has a unique skill that adds to our club’s operations and success. Check out our board members’ bios below! 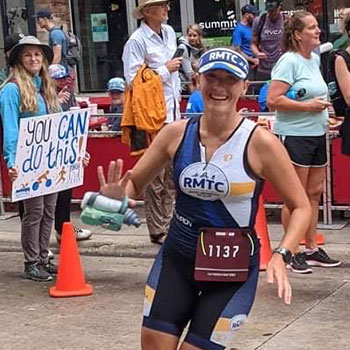 Growing up in Shanghai, China Heather was a year- round athlete, playing volleyball, basketball, soccer, track/field, and ultimate frisbee. She found her love for triathlon 5 years ago with the University of Minnesota’s club team while attending graduate school. She moved to Denver in 2019 and joined the Rocky Mountain Triathlon Club after signing up for her first full ironman. She spent hundreds of hours training alongside this fantastic group of like minded individuals and shared in the joys and defeats that accompany training and racing. She is super excited to be able to give back to this amazing community and support others at whatever stage they are in their triathlon journey. 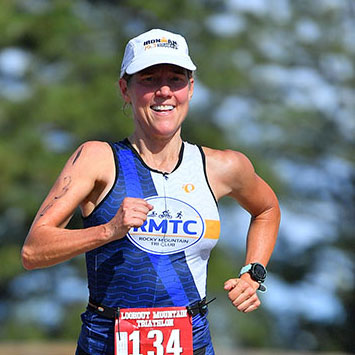 J’ne has been active in RMTC as a Volunteer Coach and Communications Director since 2017. She was a sponsored trail and marathon runner for 15 years until she figured out that cross training was a much healthier (and fun!) alternative. She did her first triathlon in 2008 and has never looked back! She loves to compete so you will find her racing in most of the local triathlons. She has also completed 4 full Ironman races and dozens of 70.3 races across the US and Canada. She is a USAT certified coach and certified yoga instructor. In addition to one-on-one coaching, she offers free group swim, bike and trail/snowshoe runs to supplement the group workouts offered by RMTC. 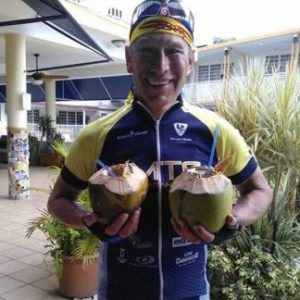 Charley is one of the founding members of RMTC, and was the first president of the club. As one of the active coaches for RMTC, he prepares and leads the weekly group workouts, providing guidance for all participants. He has been a lifelong athlete, having competed in track and cross country for Wichita State University. He began racing triathlons in the early 1990s, and started coaching triathletes in 2001. He is a USAT certified coach, and through his own company, CP Fitness and Training, he provides individual training plans for triathletes, runners, swimmers, and cyclists. 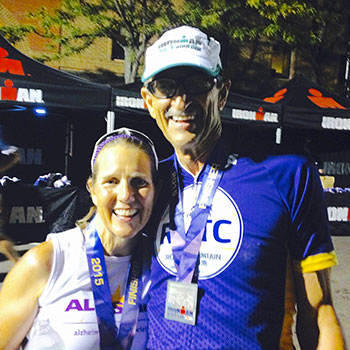 When Loretta was 45, her daughter asked her to run a 5K.  She had run one in college, so why not?  That led to signing up for the Tri for the Cure sprint. She prepared by taking 3 swimming lessons at the Golden Community Center and buying a bright colored swimming suit to make it easier to rescue her if she sank.  Using her philosophy of “Float, Coast, Stroll, Laugh”, she has now done a number of triathlons, duathlons, and a couple marathons.  She has done two Ironman races and is signed up for her third.  She would bring some skills to the job of Treasurer.  She has a degree in Mathematics, so she can add and subtract.  She was 3 credit hours short of an Accounting minor when she couldn’t take any more discussion of debits and credits.  She was convinced to run for the Treasurer position when she discovered the club keeps their books in Excel.  She LOVES Excel. 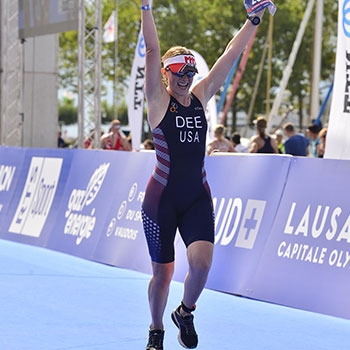 As a member of RMTC since 2016, I have valued all that the club does and offers as it has been a part of my journey to countless podium finishes and races at the national and world level.  I got my start in triathlon in 2009 with a few local sprint or olympic distance races.  In recent years I have had the honor of racing as part of Team USA in 2019 for the World Grand Final in Lausanne, Switzerland, Olympic/Standard distance triathlon.  After an incredible 2021 race season, I will have the honor of being part of Team USA again in 2022 for Aquathlon and Olympic/Standard distance triathlon.  If that isn’t enough, I have the opportunity to race with the best in the world at Ironman 70.3 Worlds in St. George, UT too!  With gratitude for how much RMTC has supported me as an athlete over the years, it’s wonderful to give back to the club more and serve on the board for 2022. 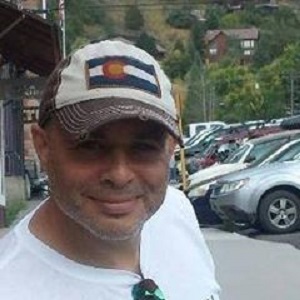 I am originally from the NY/CT area but I got hooked on the the endurance / fitness lifestyle, as soon as I moved here.  I love the triathlon world.  Its 3 disciplines leads to a varied fitness routine that never gets boring.  I also enjoy combining it with my love for travel and adventure.  I am excited to be the sponsorship officer for RMTC in 2020 and bringing new and exciting partners to our club.  Look forward to a great 2020 Triathlon Season! 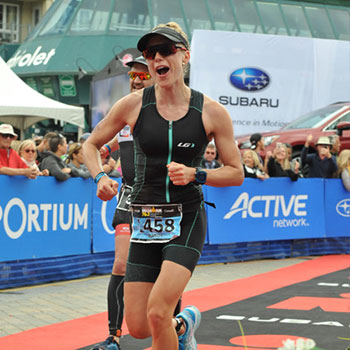 Mandy has been a member of RMTC since 2017, and she’s been doing triathlons since 2015 (mostly). She’s completed every distance, and the 70.3 is her favorite. Mandy came into a triathlon as a runner, although she grows fonder of the bike each year. Swimming, however, will always be a nemesis. Mandy is grateful for the the myriad training opportunities RMTC provides each year — not to mention the best swimming, biking and running friends — so she looks forward to giving back to a group that has given her so much. She volunteers in her own time, and looks forward to continuing and expanding the volunteer offerings through RMTC. 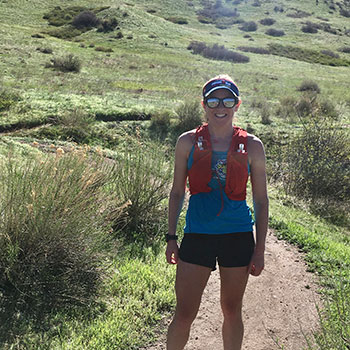 Originally from Baltimore, Theresa has lived in St. Louis, Madrid, Shanghai, Boston, New York and now Denver. As a child, she swam and did horseback riding. In college, she started running recreationally a few times a week. As a graduate student at Tufts University in Boston, she had the opportunity to run the Boston Marathon with the university’s charity team. Training for her first marathon, Theresa fell in love with long distance running even through a brutally cold Boston winter. Since 2009, she has run 19 marathons including all 6 World Marathon Majors. Ready to take on new challenges, Theresa completed her first Sprint and Olympic distance triathlons in summer 2018 and finished the Boulder 70.3 in 2019 and 2021. She claims that the 70.3 distance is her limit, but inspiration from RMTC teammates has her pondering the possibility of doing a full Ironman event in the future.

Josh did his first sprint triathlon in 2015, after virtually no physical activity for 15 years. Despite nearly drowning in the swim, burning all his matches on the bike, and limping through most of the run, he was hooked. Six years and dozens of races later (swimming, running, cycling, and triathlon), he’s still loving every minute of the tri lifestyle, training as often as possible with the wonderful RMTC crew. His big goal right now is to qualify for and compete in the ITU World Championships (Olympic Distance). He owns his own web design & development business and has two wonderful teenage kids. 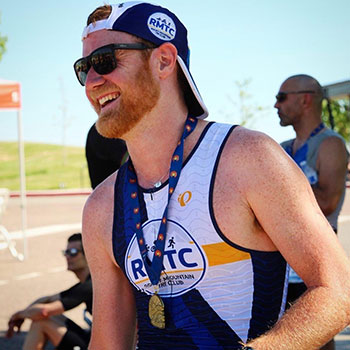 Matthew has been an RMTC member since he moved to Denver in 2019 and he went to his first track workout the first Tuesday he moved to Colorado (you just have to jump right into the altitude training!). Coming from a running background, Matthew has been competing in triathlons for over 10 years, there is no better place to train or team to be a part of. As the Major Events Officer, my goal is to ensure that our large scale events are welcoming and engaging for all of our members. 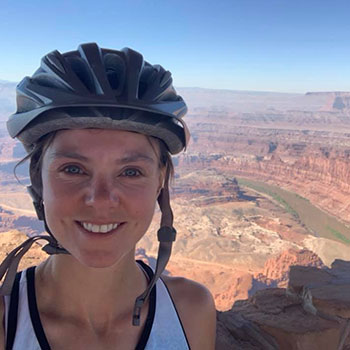 I’ve been an avid triathlete since 2012, working my way up from sprints to a full ironman in 2014. I took 4 years off tris from ’15 to ’19 when I moved to NYC. Hard to find a pool there! My husband, Daniel and I moved to Denver in January 2020. What a fun time to move to a new city! We joined RMTC in March ’20, also a great time to join a social group! But honestly, it was. Tri training was one of the only safe activities and this team literally became my friends, family, and key surviving a pandemic. It’s been so fun getting to know everyone and cheering each other through a return to racing. I’m hoping to earn this social position so I can get us all together for some non- tri stuff too! Might be weird to see each other in street clothes but I think it will be fun and worth it! 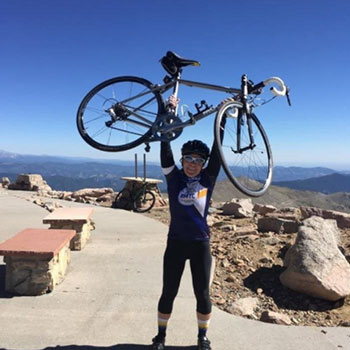 I am excited to strengthen the social media presence for RMTC with engaging stories, and photos to bring RMTC members together and create a sense of community and inclusion in our club. I have been a triathlete for many years and believe that I have the familiarity to spot content that would perfectly represent RMTC. I have experience working with social media since I am also the Social Media Chairperson for Toastmasters International District 26 which includes Colorado, Wyoming, and Western Nebraska where I am responsible for all social media postings including Facebook, Instagram, and Twitter. I am also an Instructional Designer where I create online learning.

Take your race to the next level. Become a member today.